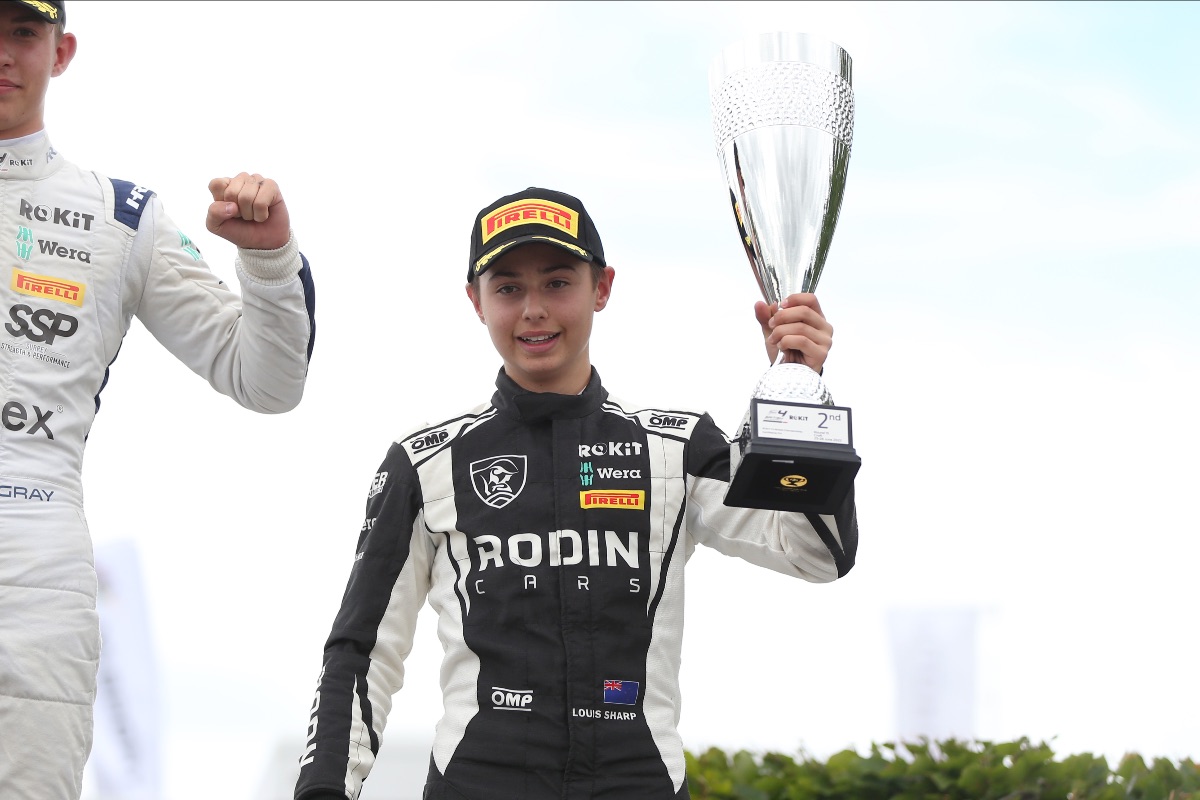 Talented teenager Louis Sharp arrived at Croft for this weekend’s (25-26 June) three rounds in the ROKiT F4 British Championship certified by FIA in fine form after his standout successes two weeks ago at Oulton Park.

Belying his position as the youngest and least experienced of all the aspiring Formula One hopefuls on the 2022 F4 grid, the far-travelled 15-year-old New Zealander posted a hat-trick of podiums on his debut at the tricky Cheshire circuit, topped by his milestone maiden F4 victory.

Taking confidence from those ultra-impressive performances, the Rodin Cars protégé maintained his recent run of good form at Croft with three more top six finishes – the results, though, do not tell the full story of an action-packed weekend loaded with character-building frustrations, drama and hard-charging performances.

Qualifying on Saturday morning was certainly frustrating with a red flag late in the session preventing Sharp from showing his full potential on the testing 2.12-mile circuit in the north east of England. As a result the promising young Kiwi would start all three 20-minute showdowns from the third row of the grid, including race two which sees the top ten from qualifying lining up reverse order.

Determined to respond to the challenge, the rookie F4 racer made a fast start to the afternoon’s first race, battling his way from sixth to fourth position on the opening lap, hard on the heels of the three front runners.

From there onwards the top four were in a class of their own running in close formation and pulling well clear of the chasing pack. However with equally-matched cars and no driver aids – such as push-to-pass or DRS – to assist overtaking, the order stayed the same throughout the 16-lap encounter. Despite making a late lunge for the podium on the final lap, Sharp in the end had to settle for a close fourth place. With less than 1.4 seconds covering the leading quartet as they flashed past the chequered flag, it was a case of so near and yet so far.

The second of Saturday’s two races would showcase more of the young New Zealander’s skills. Having been hit from behind and spun around on the crowded opening lap, Sharp was the one to watch as he carved his way back through the pack. Setting a succession of personal best lap times right up until the finish, the hard-charger had fought his way back up to a stirring sixth place by the end of the final lap.

Speaking on Saturday evening, Sharp was keen to concentrate on the positives: “Overall it was a good day and we showed some really, really good speed,” he enthused. “Qualifying didn’t quite go as planned – the red flag really hurt us. I should have been two or three positions further up. Race one was pretty good, making up two places on the first lap and showing some really good speed. Unfortunately, as it’s so hard to follow other cars, it was impossible to make any more progress… though I did nearly make it to the podium on the last lap.

“Race two clearly didn’t get off to the ideal start. It was a shame to have been hit up the back on the first lap and forced to rejoin virtually last. We were so far behind, but it was a really good recovery drive and again we showed some really, really good speed.”

Sunday dawned with some even better news for Sharp: overnight two of his closest rivals were handed grid penalties for infringements in the previous round and thus he was promoted to third from fifth as the cars lined-up for the weekend’s third and final race. And then things got even better when pole sitter, and first race winner, Aiden Neate jumped the start, thus incurring a ten second time penalty.

Taking full advantage of others’ misfortune, as the lights went out Sharp tucked into second place and, having just set the fastest race lap, was poised to challenge Carlin team-mate Oliver Gray for the lead when the race was red flagged following an accident further down the field.

The race then restarted after the second of the weekend’s headlining British Touring Car Championship showdowns with Sharp now on the outside of the front row. It was the third placed Oliver Stewart who made the best start, however, grabbing the lead as battle was rejoined.

Then, as Stewart defended his lead from Sharp, the duelling duo were jumped by second year F4 racer Gray in an audacious move around the outside. A lap later Sharp, too, made it past the fast-starting Scot to grab a well-deserved second spot and with it his sixth podium from just 12 starts.

“It was a good race and good points in championship,” agreed the fast rising young Kiwi star. “After being spun round yesterday, it was a great comeback to be back on the podium once again. I went to the inside a got boxed in and that probably cost me the win but it’s still a very positive way to be going into the break and I’m really looking forward to the rest of the season.”

Although the young Rodin racer was forced to miss the opening three rounds of the series while waiting to reach his 15th birthday, Sharp holds an excellent fifth place in the championship standings as the 2022 campaign reaches its half-way point.

There is now a five week mid-season break before the second half of the campaign blasts off at Knockhill in Scotland at the end of July. In the meantime, Sharp will get a taste of the life he is seeking in the future by attending next weekend’s British Grand Prix at Silverstone.

*only contested 12 of 15 rounds as too young to enter the opening race weekend. 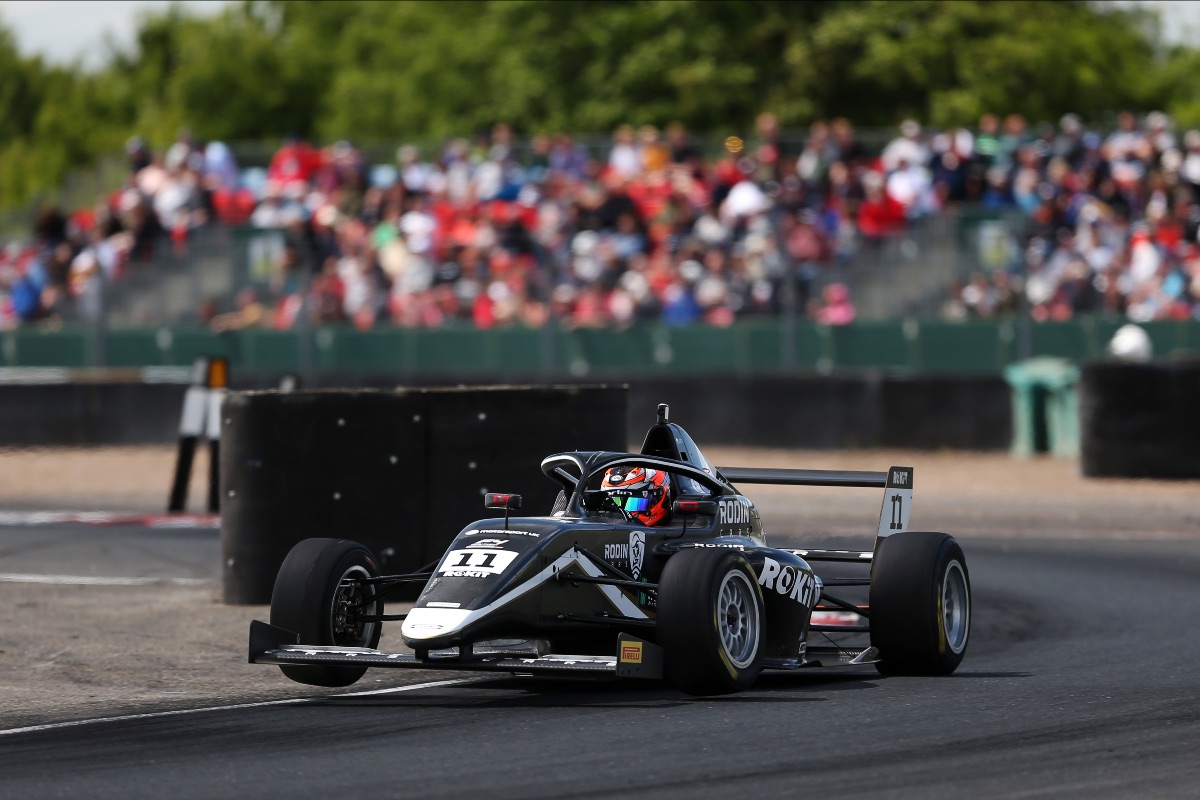