After notable feats racing karts and Formula Ford single-seaters back home in New Zealand, promotion into this year’s British F4 Championship is the next big step towards Sharp’s dream of making it all the way to Formula 1.

Having missed the first weekend while waiting to turn 15 – and thus be old enough to compete – the talented teenager arrived at Brands Hatch as the youngest and the furthest travelled on a grid packed with some of the world’s most promising young drivers.

Despite starting on the back foot, Sharp hit the ground running when underlining his potential by clocking the second fastest lap time in Friday’s opening Free Practice session.

With all the drivers lining up in identical Tatuus racers, all powered by identical 1.4-litre Abarth turbo engines, just fractions of a second separated all the top runners as they entered Saturday early morning’s critical qualifying on the venue’s short 1.944km Indy circuit.

At the end of the fiercely-fought 20 minute session, Sharp’s fastest two laps were good enough for ninth on the grid for the first race on Saturday and eighth for the  third race scheduled for Sunday. More importantly, with the top ten qualifiers being reversed, Sharp would line-up on the front row for the weekend’s second showdown.

Highlighting, perhaps, his limited knowledge of racing on slick tyres, the young Kiwi’s race debut suffered an immediate set back. As the revs on the grid raised and the lights went out, the rookie stalled the engine on his car dropping him to the back of the fast departing pack.

Undeterred, however, the Rodin Cars protége rose to the occasion. Showing some impressive racecraft and belying his lack of experience at this level, he battled back to grab tenth place at the chequered flag and with it a hard-earned championship point in his maiden appearance.

Lining up second for race two, Sharp was understandably cautious at the start after his earlier issues, but still grabbed third place as the field sped away. Thereafter he never put a wheel wrong, briefly challenging those in front and setting several fastest laps before settling for what appeared to be a remarkable podium in what was just his second F4 start.

As the dust settled, though, he was given a five second time penalty for a minor pre-start infringement when warming up his tyres on the way to the grid. This dropped him to sixth place in the official race results.

The glorious sunshine that had accompanied the opening two races was replaced by cloud and rain showers for race three on Sunday, which was broadcast live in a prime slot on free-to-air ITV.

With absolutely no previous experience of the car or circuit in wet conditions, Sharp faced an additional challenge in the final encounter of the weekend, but he got away from the line well to move up into seventh on lap one before showing astonishing reflexes at the end of lap two when a car ahead suffered a spin exiting the final corner.

As those in front were forced to take avoiding action, Sharp seized the opportunity and picked his way through the pack to rocket up into third place, with the safety car then deployed to allow a stricken car to be recovered from the gravel.

On the restart, showing incredible maturity the Kiwi teen eased away from the chasing pack with a number of strong laps in the challenging conditions, and was rewarded with a remarkable third place at the chequered flag to make up for the disappointment of the previous afternoon.

Encouragingly, Sharp ends the weekend having already surged into the top ten in the championship standings despite being unable to compete in the opening weekend.

"I was pretty gutted to lose the podium in race two, but I’m delighted to come through to third from P8 on the grid to round out the weekend," he said. "It was a bit close when two cars crashed in front of me as I didn’t know where they were going to end up, and I went to the inside and made it through. After the safety car, I didn’t quite have the pace to match the pair ahead but I was able to manage the gap to the drivers behind, and just take it easy through to the finish.

"I’d never driven this car in the wet on treaded tyres before, so it’s good to now have a wet race under my belt; particularly one that went as well as it did! It’s been really beneficial to get the chance to race in all weathers as I’m here to learn this season, and if you never get the opportunity to race in those conditions, then you are never going to improve.

"Coming into Brands Hatch, I didn’t really know where I would stand, so to have a podium finish in one race – and finish third on the road in another – is great for me. I’m really happy with the results and it shows we have the pace and can compete at the front in this series.

"The Carlin team has been fantastic to work with this weekend, and a massive thank you to them for their efforts. Going away from Brands Hatch and my first meeting in British F4, I don’t think I could be much happier."

Team boss Trevor Carlin, whose team took Lando Norris to the F4 title in 2015, was equally swift to congratulate his latest young charge. “It’s been a wonderful first weekend for Louis,” he lauded. “It was great to see him on the podium having driven a brilliant race. He’s super quick and super professional. Considering he’s only just turned 15, and this is his first weekend racing in the UK, it’s an awesome performance. So I’m chuffed to bits!”

Building on the lessons learned at Brands Hatch, Sharp’s next chance to impress comes at the superfast Thruxton circuit in less than two weeks’ time on 28-29 May. 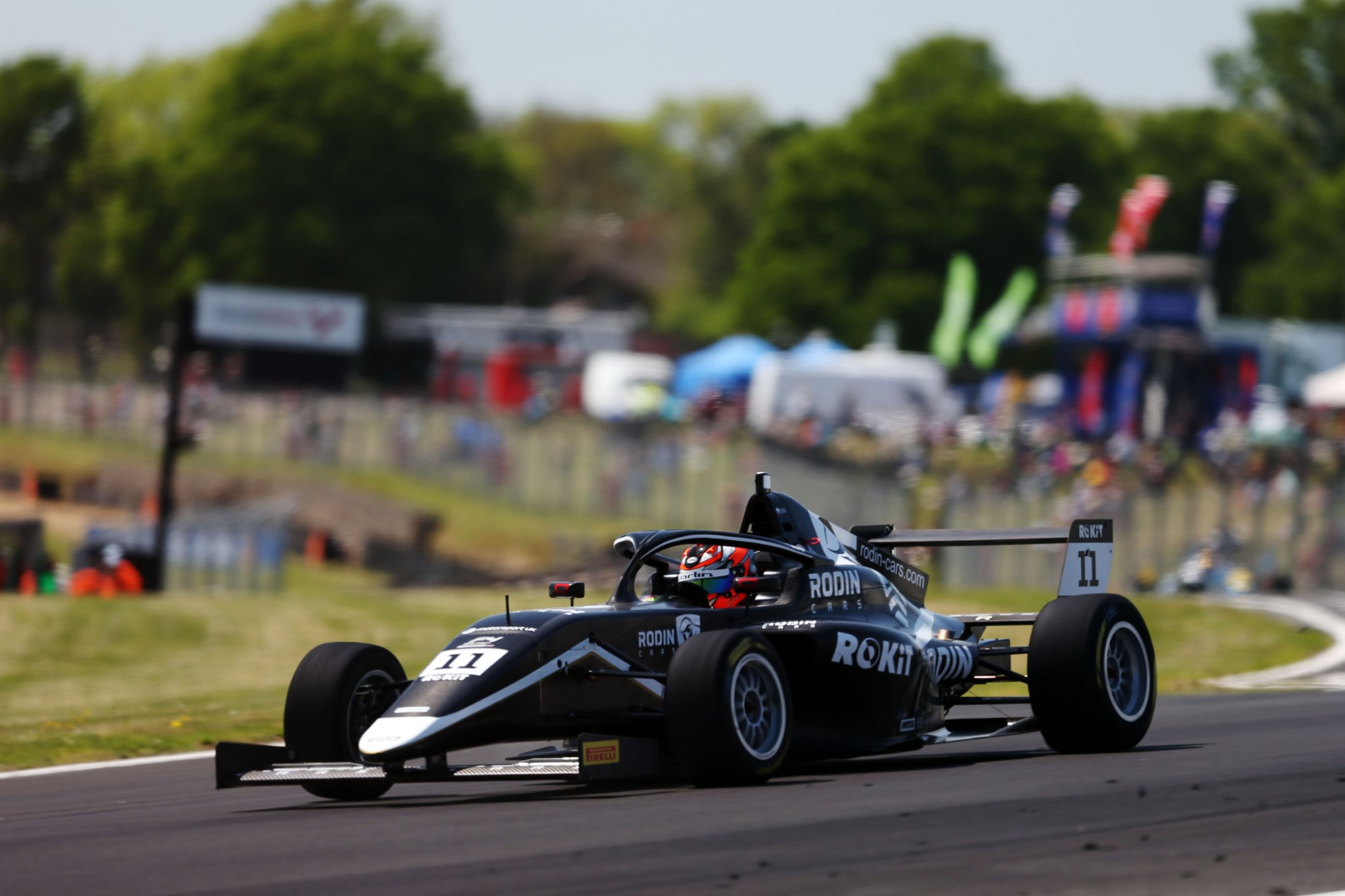